skip to main | skip to sidebar

Now at your Local News Stand Check out my work in the Summer issue of VenusZine. It has Missy Elliott on the cover — you can't get much better than that!
Posted by Loren at 9:03 PM 90 comments: I've been slogging away at Thing-a-Day this month. I've made a lot of jewelry and origami that I haven't posted here, but I thought I'd share these two little creatures. I made the owl in flash, and the Jackalope is on a teeny-tiny canvas with gold glitter. These were both a lot of fun to make.
Posted by Loren at 8:11 PM No comments:

This week's theme on Illustration Friday was "Choose". With the MCAS (Massachusetts state assessment tests) coming up soon, some of the kids in the school where I work have become preoccupied with test scores. I think it's a shame how the education system has become so focused on standardized testing — turning children into little "test-heads".
Posted by Loren at 8:07 PM 9 comments:

I've been participating in this year's Thing-a-Day. Everyone who signs up makes one thing each day in February and posts it on the site. So far it's been a great motivator for me, and it's also great to see what other people are working on. Here are the first four things I made: a tiny painting with glitter, a bead necklace, a sketchbook and five paper cranes. Now I need to go brainstorm about what to make today!
Posted by Loren at 5:55 AM No comments: 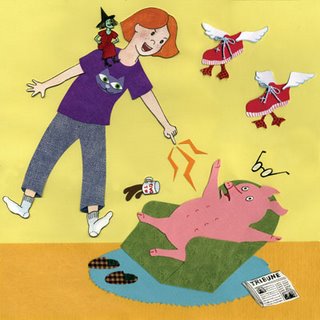 This is a piece I created for Roger Omar's book of illustrated kids' dreams. Roger has been collecting accounts of dreams from kids in many countries, and now he is putting together a book with illustrations of those dreams. The dream I chose to illustrate was by a little girl in Spain. Here is a translation:

"I dreamed that I was old. Then a little tiny witch came and transformed me into a 8 years old girl witch, and I transformed Gema's father into a pig, and my basketball girls trainers I transformed into ducks."

You can see more illustrations on Roger's Flickr page.
Posted by Loren at 8:40 PM No comments: 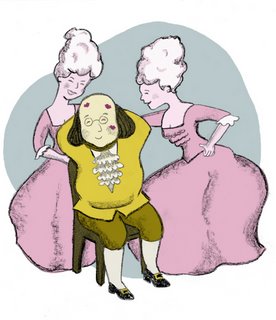 This week, I chose as my subject not an invention, but an inventor — the extraordinary Benjamin Franklin. In December, 1776, Franklin travelled to Paris as the America's first ambassador to France. There, he circulated amongst the French aristocracy, cementing an alliance which would eventually help America win the Revolutionary War. Franklin was a much loved figure in France, so much so that a portrait of him could be found gracing many a French home. Biographer Claude-Ann Lopez writes that Franklin "was temperamentally suited for France. The streak of irreverence that ran through his entire life found a congenial reception in Paris, as did his love of laughter and desire to amuse. He did not shock the French, nor did his interest in women, which was considered perfectly normal." (Thanks to PBS for the quote)

To better tie it all in with this week's topic, here is Wikipedia's list of things invented by Franklin:

He also founded the first public library and the first volunteer fire department in the U.S.

So, grade school history lesson aside, here he is enjoying some much deserved attention from a pair of adoring French ladies — a symbol of good international relations many of us could benefit to learn from today.
Posted by Loren at 9:59 PM 7 comments: